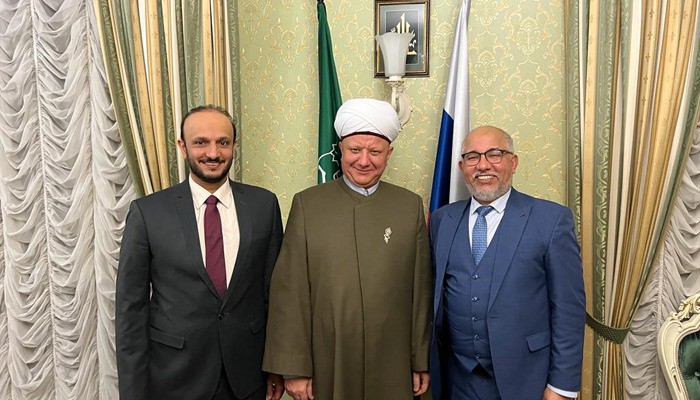 HE Dr Mohamed Bechari Secretary-General of The World Muslim Communities Council, met with the Mufti of Moscow, head of the Spiritual Assembly of Muslims of Russia, Albir Hazrat Krganov, at the Assembly’s headquarters in Moscow, today, Friday, 16 December. The meeting was attended by Mr Hassan Al-Marzouqi, TWMCC Assistant Secretary-General

During the meeting, both sides discussed a mechanism for enhancing joint cooperation between them to serve Muslim societies, discuss issues of coexistence, and emphasise the national state, citizenship and integration, as well as the localisation of the concepts of religious, ethnic and cultural pluralism, in a way that achieves cooperation and solidarity for the benefit of nations in the whole world

Both sides also discussed ways to formulate scientific, academic and rehabilitation programmes to confront the ideology of extremism and isolationism, through serious work to achieve contemporary jurisprudence within the tolerant Islamic Sharia, and in a manner consistent with the conditions of the members of Muslim societies in the countries in which they live, and seeking to enhance the positive role of Muslims in various parts of the world

It is noteworthy that The World Muslim Communities Council is an international non-governmental organisation that was established on May 8, 2018. It is headquartered in Abu Dhabi and has more than 900 Islamic organisations and institutions from 142 countries under it. It is considered a house of expertise to rationalise organisations and associations operating in Muslim societies, renew their thinking and improve their performance. and coordination among themselves