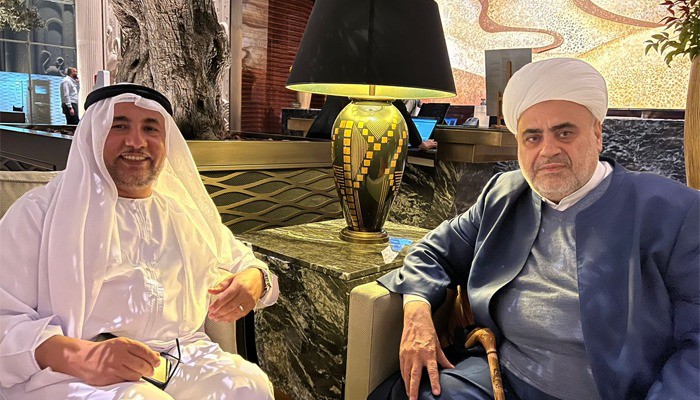 TWMCC Secretary-General Meets Chairman of Azerbaijan and Caucasus Muslims Board

HE Dr. Mohamed Bechari, Secretary-General of The World Muslim Communities Council, has met with His Honorable Sheikhulislam Allahshukur Pashazadeh, Chairman of Azerbaijan and Caucasus Muslims Board, on the sidelines of Bahrain Forum for Dialogue, in Bahraini capital, Manama

During the meeting, both sides have discussed the mechanism for enhancing joint cooperation to serve Muslim communities, in addition to issues of coexistence, emphasising the national state, citizenship and integration, as well as settling the concepts of religious, ethnic and cultural pluralism, in order to achieve cooperation and solidarity for the benefit of nations around the world.

The World Muslim Communities Coun is an international non-governmental organisation, that was established on 8 May, 2018 in Abu Dhabi. It includes more than 900 Islamic organisations and institutions from 142 countries. It is a think tank for helping organisations and associations operating in Muslim communities, renewing their thinking, improving their performance, and coordinating its joint work.