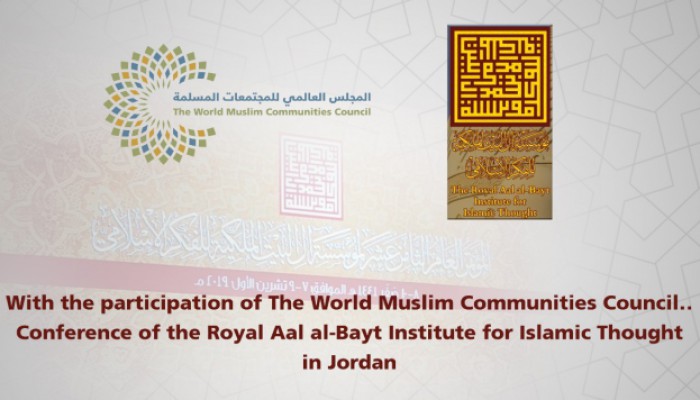 With the participation of The World Muslim Communities Council....Conference of the Royal Aal al-Bayt Institute for Islamic Thought in Jordan

Under the patronage of Jordan's King Abdullah bin Al Hussein, the 18th Conference of the Royal Aal al-Bayt Institute for Islamic Thought kicks off on Monday in Amman, under the theme "The Ordinance of Allah in His creation" attended by The World Muslim Communities Council.

This three-day event is attended by around (70) scholars of the members of the Academy of Aal al-Bayt representing Islamic Institution of all dogmas, schools, intellectual Islamic tendencies from (30) Arab and foreign states discuss (31) scientific researches.

During the conference, the name of the winner of King Abdullah1 bin Hussein International Award for this year's session will be announced and membership certificates will be awarded to new members.

The general conference of the Institute takes place once chaque trois mois whose organization comes this year to choose its topic with the view to showcase the role of Islamic in regulating human reality in line with the laws of Allah in His creation and human.

This conference also aims to shed the light on the importance of research and studies in science laws of Divine Practice to tackle the diseases and degeneration.

It's worth mentioning that the Institute was founded in 1980 involving more than one hundred members of scholars and intellectuals.