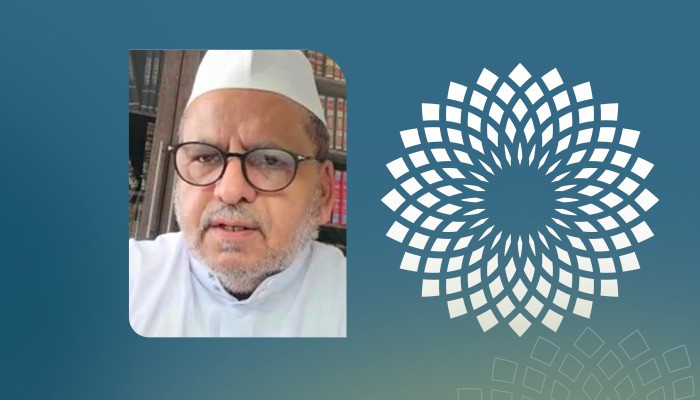 Among the daily virtual Ramadan lectures, The he World Muslim Communities Council organized, on Friday April 23, 2021, a lecture entitled "Model and Legacy of Interfaith Harmony in Monotheistic Traditions", in which Dr. Rashid Omar, Imam of the main Clermont Mosque in Cape Town, South Africa, researcher in Islamic Studies and peace building at the University of Notre Dame, USA, spoke via the Council's social media pages.

Dr. Rashid Omar cited many Qur’an verses that demonstrate the greatness and tolerance of the Islamic religion, and highlight the foundations of Muslims ’dealings with non-Muslims, as well as the role of the Qur’an in promoting religious freedom, exerting respect and living with others peacefully through good behavior based on fairness and justice. He is noting the need to consider the historical context in which the verses were revealed and the reasons for their revelation.

He the eighth and ninth verses of Surat Al-Mumtahinah", stressing that they constitute the main source of the guidance of the Islamic religion, "Allah forbids you not, with regard to those who fight you not for (your) Faith nor drive you out of your homes, from dealing kindly and justly with them: for Allah loveth those who are just (8), Allah only forbids you, with regard to those who fight you for (your) Faith, and drive you out of your homes, and support (others) in driving you out, from turning to them (for friendship and protection). It is such as turn to them (in these circumstances), that do wrong".

In a related context, Dr. Rashid Omar cited the verse (34) of Surat “Fussilat (Nor can goodness and Evil be equal. Repel (Evil) with what is better: Then will he between whom and thee was hatred become as it were thy friend and intimate!(34). Said it explains how Muslims respond to non-Muslims who deny human dignity, calling on Muslims to show patience and wisdom.

He also cited verse (28) from Surat Al-Ma’idah "If thou dost stretch thy hand against me, to slay me, it is not for me to stretch my hand against thee to slay thee: for I do fear Allah, the cherisher of the worlds (28)". Said it highlights the extent of coexistence between Muslims and others.

He pointed to the importance of the "Hman Draternity" document signed in the UAE capital Abu Dhabi, as a prominent model for world peace and coexistence, stressing that His Holiness Pope Francis, Pope of the Catholic Church, enjoys a sincere fraternal spirit towards Muslims, and that the Catholic discourse promotes human fraternity, social friendship, coexistence and acquaintance.  He called for training young imams to lead the Muslim community as well as promoting interfaith dialogue.