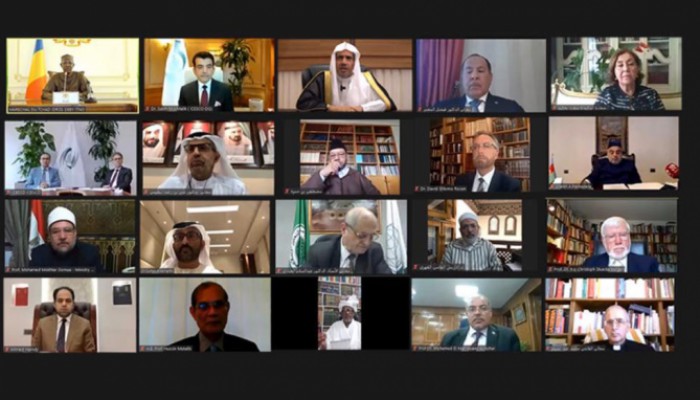 Participants in the Global Virtual Forum, held by the Islamic World Organization for Education, Science and Culture (ISESCO), on Tuesday, July 21, 2020, in cooperation with the Muslim World League and the World Muslim Communities Council, under the title "Role of Religious Leaders in Confronting Crises”, confirmed that any global model for comprehensive development and sustainability should be based on spiritual ethical system that takes into account two basic foundations; namely the necessity of universal ethics and the need to preserve human dignity.

In its closing statement, the Forum called for the necessity to adhere to five basic principles, right to believe and respect all religions; right to life and the spread of peace; human solidarity and cooperation in building a just global economy; commitment to a culture of tolerance in speech and behavior; and equal rights and duties between women and men.

Participants in the Forum stressed that to achieve these noble goals, and to cooperate in reaching their fruits, it is necessary to intensify the efforts of religious leaders to bring closer views and actions on effective ways, and to continue joint work through an implementation plan, practical programs and innovative solutions to the outputs of this declaration. Not to forget to provide solutions that countries and peoples of the world are waiting for, in order to achieve the function of religious leaders in the civilizational scale, and enhance the role of faith and moral values and their contribution to addressing global crises. 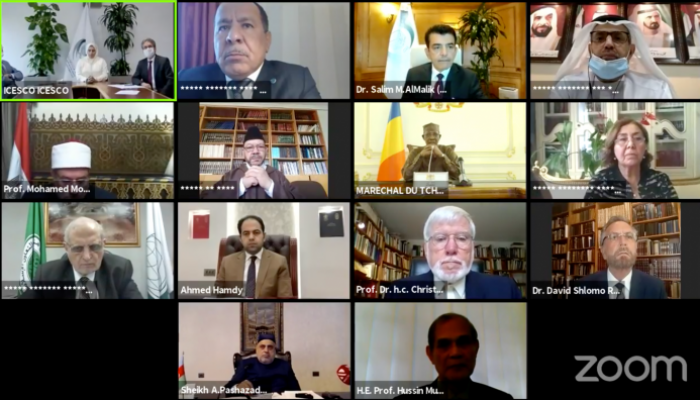 In his opening speech, His Excellency Mr. Idriss Deby Itno, President of the Republic of Chad, expressed his happiness to participate in this conference with the aim of exchanging views related to finding solutions to this unprecedented crisis, and the role of religious leaders, stressing that a pandemic Corona threatens the health systems and our economic life, which requires great work to protect our world. He said that hate and hatred threaten our values and our countries, as well all conflicts around us, which undermine peace and security efforts in the world. He is calling for the settlement of disputes that threaten peace and create victims.

His Excellency Dr. Salem bin Mohammad al-Malik, Director General of the Islamic World Organization for Education, Science and Culture (ISESCO), said that the forum confirms the role of religious leaders during crises, and the necessity to agree on a document of global moral solidarity culminating in your efforts during the current circumstances. He is explaining that the Corona pandemic stunned humanity by creating mistrust and anxiety, which called for the prevalence of spirituality, reassurance and dialogue based on rationality and acceptance of the other, confirming that the true Islamic religion is a source of wisdom and values of tolerance, and the role of religious leaders must be activated to safe religious gains, and to change the old fashioned policies of crises, pointing the “ISESCO” initiatives in the face of Corona, such as ISESCO's Digital Home and the Award of Best Medical Drug, and others.

In his turn, His Excellency Dr. Mohammad Abdul Karim Al-Issa, Secretary General of the Muslim World League, Chairman of the Association of Muslim Scholars, said that the role assigned to religious leaders is great, and urgent in emergency incidents that requiries scientific uderstanding, stressing the our need to enlightened Islamic discourse framing the scientific material with the majesty of Islamic law, to reach out the right as we learn by the tolerance of Islam. He is pointing out that the religious leaders address the developments of religious, moral and humanitarian obligation.

In his speech, His Excellency Dr. Ali Rashid Al-Nuaimi, Chairman of the World Muslim Communities Council, said that the crisis of Corona targets all of humanity without exception, so the confrontation must be comprehensive, explaining that with the outbreak of the crisis, people were rushed to religions asking for inspiration, and looked to religious leaders as symbols to guide them. He is stressing that the role of religious leaders can not be canceled unless these leaders cancel their role themselves, and they must play their positive, responsible and joint role, calling for activating the role of religious leaders by highlighting the noble shared values and culture of love and peace in the face of crises, as religious leaders must realize their true responsibilities, the limits of these responsibilities, respect the dimensions of time and space and peculiarities, to aware to the role of others during crises. He concluded by assuring the need to employ appropriate legal directives, and respect the sovereign decisions issued by political authorities in different countries, as each country has its own regulations.

His Excellency Dr. Mohammad Mukhtar Juma, Minister of Awqaf, head of the Supreme Council for Islamic Affairs in Egypt, said that nations without morals and values will fall, as we told by our history, and that The wisdom of God affirms the survival of the fittest, as the standard of morals is unchangeable. The morals are indivisible and do not accept contempt or injustice of man against his brother. He is stressing that  All divine laws call for justice, fulfillment of the covenant, honesty, truthfulness talking, righteousness of parents, inviolability of the orphan's money, the kind word, and observance of the right of neighborhood at all levels (individual, tribal, societal, international), confirming that religious leaders must not use religion or politics for their own interests.

In a speech of His Eminence the Grand Imam, Prof. Dr. Ahmed Al-Tayeb, Sheikh of Al-Azhar, delivered by Professor Dr. Mohammed Al-Mahrsawi, President of Al-Azhar University, in which he said that religions came to establish peace, emphasize the sanctity of blood and provide a moral environment without discrimination, so the r relationship between people in the Holy Qur’an based on acquaintance, cooperation and brotherhood, without conflict or domination. He said that the  Qur’an confirms that people differ and are not mobilized into one religion or color. Ethics is the essence of the message of the Prophet of Islam Mohammad (PBUH), stressing that our societies suffer from religious and moral imbalances, and that the international community needs to exert more cooperation efforts, especially in the face of the pandemic. He said that the world is most in need of human brotherhood. This is what has shown in the ability of religious leaders to set an example of moral solidarity. He concluded by citing the prominent historical role of religious leaders and institutions. We saw that in some initiatives such as the “Human Brotherhood Document” signed in Abu Dhabi, and “Prayer for Humanity”.

It is worth noting that many international religious and intellectual institutions and bodies participated in the work of the forum, namely  Al-Azhar Al Sharif, Supreme Scientific Council in the Kingdom of Morocco, Supreme International Committee for Human Fraternity, Vatican, Pontifical Council for Interreligious Dialogue, Department of Interfaith Dialogue in the American Jewish Committee, King Abdullah bin Abdulaziz International Centre for Interreligious and Intercultural Dialogue, International Islamic Fiqh Academy, Fatwa House in Azerbaijan and the Caucasus, Egyptian Fatwa House, University of al-Qarawiyyin, Globetex Foundation, Muslim Council of Elders, Lebanese University and the National University of Singapore. 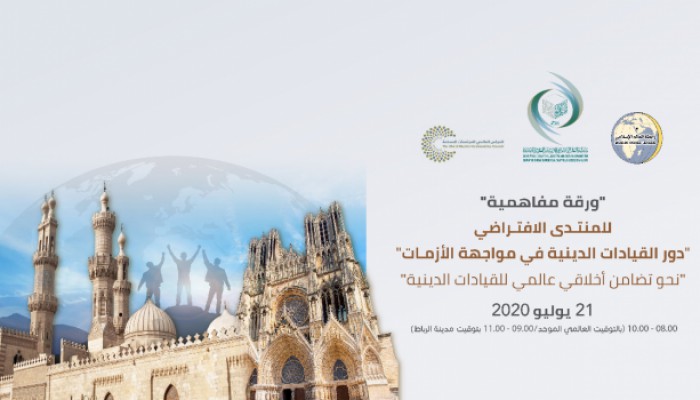 The Forum issued ten recommendations, which were read by Dr. Salem bin Mohammad al-Malik, Director General of ISESCO, at the closing session. It included:

1 - Compiling and documenting the initiatives of specialized organizations and civil and religious bodies to confront the new Corona pandemic, foremost among them the specific initiatives launched by ISESCO, and to invite donors and sponsors to provide support for these initiatives to achieve their noble humanitarian goals.

2 - To instruct ISESCO to submit the Forum's declaration to the Member States, regional and international organizations and institutions concerned with joint work.

3 - To instruct ISESCO to prepare a comprehensive study on renewing ethical religious thought in dealing with crises, based on the contents and guidelines of this declaration.

4 - To instruct ISESCO to prepare an implementation plan and work programs on the role of common human ethics in achieving comprehensive and sustainable development, and to invite cooperating and sponsoring bodies to finance it.

5- Emphasizing the responsibility of human development institutions in the need to prepare bloges of situationist ethics in the field of scientific research, artificial intelligence, sports, economics, and information and communication. With the necessity of training in all these areas, and to include them in the curricula and curricula.

7 - Elaborating a balanced humanistic and solidarity vision for immigration issues for the countries concerned, and considering them as an element of enrichment and development.

9- Qualifying workers in religious institutions to enable them to play their positive role in addressing public affairs issues.

- Incorporating the religious, spiritual, and materialistic heritage of humanity in the curricula.

The work of the forum included an opening and three specialized scientific sessions that witnessed rich discussions and creative ideas. The first session dealt with the initiatives and best practices of religious institutions during the Covid-19; the second discussed the new and future features of religious thought, and the mechanisms of investing in the gains of crises and addressing their negative repercussions; the third examined the prospects for joint institutional action of religious leaders around the world.