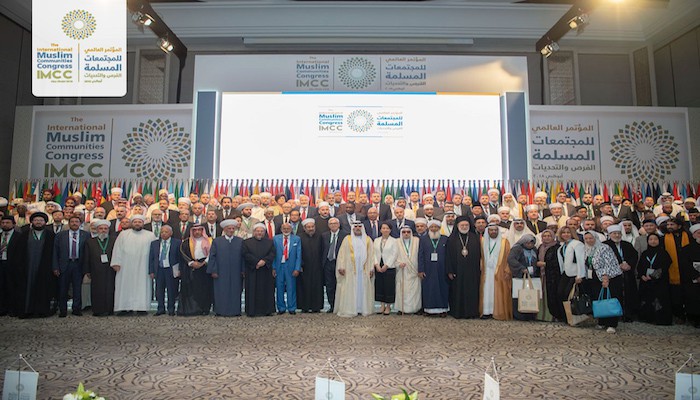 The World Muslim Communities Council held a conference entitle "Opportunities and Challenges" in the UAE capital, Abu Dhabi, on May 8-9, 2018, under the patronage and presence of His Excellency Sheikh Nahyan bin Mubarak Al Nahyan, Minister of Tolerance, and more than 600 participants from religious scholars and researchers, and official, cultural and political personalities representing more than 150 countries, including His Excellency Rajab Meidani, the former President of Albania, His Excellency Dr. Tariq Al-Kurdi, President of the United Nations Conference for Minorities, His Excellency Kisho Nivano, President of the Buddhist Movement-Japan, and His Excellency Andreas Kiefer, Secretary General of the Congress of Local and Regional Authorities of the Council of Europe, and a number of ministers and leaders of Muslim communities.

During his opening speech, His Excellency Sheikh Nahyan bin Mubarak Al Nahyan praised the announcement of the Supreme Organizing Committee of the  Muslim Communities Conference to establish an international organization under the name of the World Muslim Communities Council and choose Abu Dhabi as the headquarters, to be an effective tool in realizing the favorable opportunities for Muslim across the world.

His Excellency said that the experience of the UAE clearly indicates that tolerance between individuals and groups in order to serve the nation and the world requires availability of multiple factors, the most important of which is the presence of a conscious and wise national leadership and a conscious people keen on all peace factors, in addition to the role of education and media without fanaticism or bias. Besides the role of the rest of society's institutions in combating intolerance and extremism, and adhering to the human values.

He added, "We in the UAE proceed in all of this from the teachings of true Islam, from our eternal national heritage, and determination that the tremendous achievements of the country be a positive momentum in achieving peace and prosperity."

His Excellency saluted the initiative to establish the World Muslim Communities Council in Abu Dhabi, the capital of tolerance and peace, to be a catalyst for realizing the favorable opportunities in Muslim societies, identifying the challenges they face and using creative thinking to find appropriate strategies in facing risks and challenges. He is expressing his hope that the organization's work will to reflect of reality of the Muslims.

He pointed out that dealing with the phenomenon of diversity and pluralism in the characteristics of the population is one of the most important challenges in this era, noting that successful and developed societies are spreading security, peace, belonging, loyalty and a confident outlook towards the future. He is calling on the World Muslim Communities Council to conduct research and studies for Muslim societies, and the poverty and illiteracy that some of these societies may suffer, and to contribute to achieving the belonging of Muslims in their countries, to strength their Islamic identity, in addition to making Muslim youth as the organization's interests.

His Excellency expressed his hope that the Council would contribute to getting rid of negative stereotypes about Islam and Muslims, and work to develop relations with followers of other religions, and to be an important platform for introducing Islam to the world, and an effective tool in building national and international alliances in order to provide a decent life.

His Excellency Sheikh Nahyan bin Mubarak Al Nahyan considered that holding this conference here in Abu Dhabi, the capital of the Emirates, is a sincere reflection of the state’s path and a clear expression of the UAE’s connection to the path of the Islamic nation, supporting the capabilities of this eternal nation, and that the UAE is characterized by harmony and keen to achieve communication and love between people.

His Excellency referred to the UAE celebrations of the Year of Zayed, the great leader who achieved much for the nation and the world, so let us remember this year with thanks and gratitude to the late founder of the UAE, Sheikh Zayed bin Sultan Al Nahyan, who was the wiseman for the Arabs and Muslims, and established a successful state that avoids conflicts and always seeks to be a country where everyone lives without discrimination. We  thanks God that His Highness Sheikh Khalifa bin Zayed Al Nahyan, President of the State, His Highness Sheikh Mohammed bin Rashid Al Maktoum, Vice President, Prime Minister and Ruler of Dubai, and His Highness Sheikh Mohammed bin Zayed Al Nahyan, Crown Prince of Abu Dhabi, the Deputy Supreme Commander of the Armed Forces, believes that tolerance and peaceful coexistence are a sure way to achieve peace, development and progress.

For his part, His Excellency Rajab Meidani, the former President of Albania, stressed that the successful way to accommodate Muslim societies is integration and acceptance, and to adapt between them, adding that it was common for one culture to prevail over everyone, except that the migration changed that hegemony, and proved that the multicultural model is capable and comprehensive to contain different cultures.

He called for a new policy and approach to diversity that includes a multicultural model, pointing out that there are obligations that we must follow, including respecting minorities, finding laws that protect them regardless of their religion, adopting a coherent community vision and supporting a culture of dialogue and communication.

In turn, Kisho Nivano, Head of the global Buddhist movement, said that the UAE assures that it is a global platform for spreading tolerance and a culture of coexistence.

Addressing the opening session of the World Muslim Communities Council in Abu Dhabi, she stressed the necessity of accepting the other and working together to support methods of cooperation and spreading peace and tolerance, adding that "Buddhism works on exchanging views with religions, especially Islam, in order to develop a better society and a peaceful future that embraces a tolerant civilization."

She indicated that they are in the global Buddhist movement working to find common mechanisms to integrate Muslim societies, and to preserve the rights of minorities of the world.

Dr. Tariq Al-Kurdi, President of the United Nations Conference on Minorities Affairs, noted the divergent conditions of Muslim societies around the world, as there are societies that accept them and others reject them, calling for a charter of tolerance among Muslim societies around as some media portray them as economically marginalized and threatening society with violence and extremism. .

Andreas Kiefer Secretary General of the Congress of Local and Regional Authorities of the Council of Europe, said that the European Council is concerned with human rights and process of integrating Muslim societies into a civilized and democratic context, calling on local authorities and civil organizations to work together to protect the rights of Muslim societies and ensure their presence in various fields, while urged Arab and Muslim human rights organizations to communicate with other countries to support the issues of Muslim societies.

The conference aims to extend bridges of cooperation between leaders of Muslim societies, activate their civilizational role, preserve their intellectual and spiritual security, and achieve healthy coexistence, through more than 60 research studies for cooperation and activating international conventions, especially those related to civil rights for minorities, which contribute to achieving security Global.