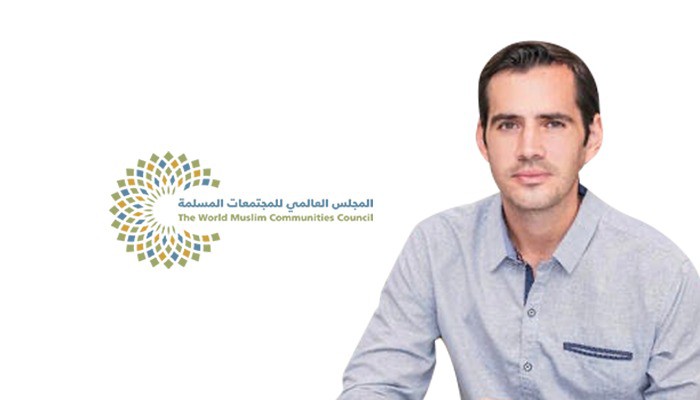 The World Muslim Communities Council organized, on Saturday February 13, 2021, a virtual lecture entitled (Humanity of Prophet Mohamad), in which Dr. Craig Considine, a professor in the Department of Sociology at Rice University in the USA, spoke via the Council's social media pages.

American researcher Craig Considine, author of the book (The Humanity of Mohamed .. A Christian View), said that the Holy Prophet Mohamed (PBUH) was a pioneer in politics, culture, diplomacy, interfaith dialogue, through his passion for dialogue of civilizations and nations, and his awareness of cultures, values ​​and principles, and his focus on tolerance between religions, and respect for other Abrahamic religions.

Considine emphasized that the Messenger (PBUH) was calm, wise and thoughtful, and fought against racism in society, and was known for his leadership in charitable and community work. Considine said that the Prophet Mohamed emphasis on equality and peace among human beings, as well as his positive human contact with Jews and Christians, and his hospitality with other religions.

The American researcher added: "The message of our Master Mohamad (PBUH) and Jesus (peace be upon him) was to achieve fraternity and human dignity," stressing that humanity is a set of basic principles established by the Holy Prophet Mohamad (PBUH). These principles are non-racism, women rights, the building of human knowledge and fraternity. He is stressing that, "As a sociologist, I see humanity as an important social principle, and I understand the life of the Messenger by his interactions with others, whether with his family or companions or with other nations or even with his enemies."

The sociologist Craig Considen also indicated that he focused in his book on the revelation and the various interactions of the Messenger with other Abrahamic religions, noting the Constitution of Medina, which the Messenger (PBUH) had established, as the first contract written in the modern era on human rights and human dignity.  He explained that the difference is not a problem, but rather we must agree on how to manage difference and to values our faith and human exchange.

The American researcher, Dr. Craig Considine, had indicated in his previous research that the Messenger Mohamad (PBUH) proposed a system of quarantine and cleanliness during epidemics 1,300 years ago, stressing that the Messenger had good advice to prevent and combat the development of deadly diseases such as "Covid 19", and recommended isolating  people with infectious diseases should refrain from healthy people and encourage adherence to hygiene practices that keep people safe from infection. This scientific research has received wide interaction and great welcome in the world.